While the insect as food industry is waiting for the new European novel food regulation, Finland moved forward and allowed sales of edible insects within the country on September 2017. Since then, a lot of events already happened and people seemed to catch on and want to eat insects.

Exciting news such as a bread enriched with cricket proteins hitting the shelve, a meat processor eager to make people eat insects and soon the most important European insect farm, it moves fast in the North! 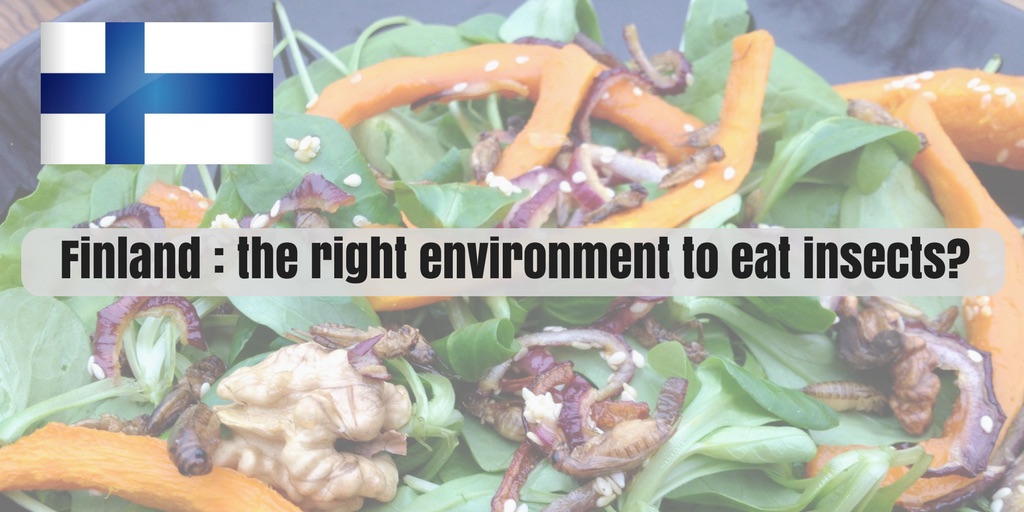 While Finland is “only” the 5th European country to officially allow edible insects to be sold on their shelves, this time it seems to better catch on. Belgium and Netherlands were the first movers, followed lately by Austria and Denmark.

While in these countries, opening the market didn’t seem to have such a considerable impact, in Finland a lot of exciting announcements have already followed.

From innovative food products to insect farms, the Finnish Insect industry could take the lead in Europe. At the same time, people seem to be interested in eating insects. What are the factors that are leading to this “sudden” friendly eating insects environment in Finland?

Let’s start with something clear; it’s not a sudden boom. As for many things, we often imagine that it happened overnight, that Finland decided to open the market and suddenly it started catching on.

Finnish insect companies and experts were already leading and paving the way for many years.
Insect farmers, consultants, chefs and insects as food companies had positive relationships with media for years. This positive media coverage and cooperation allowed them to “Make Regulators Work for them”.
As an example, before it was allowed to sell insects as food in Finland, Entocube sold their crickets as “kitchen decoration products” to raise public awareness.

This sudden growth is like the bamboo tree.
The Chinese bamboo tree grows 80 feets in 6 weeks. But before this sudden explosion, it has developed slowly and invisibly for four years in fertile soil.

Who created this fertile soil?

How to make people want to eat insects: Chef and innovative insect companies raising public awareness and getting media attention

For making people want to eat insects, we need to make them delicious. In Finland, there is an expert for that! Topi Kairenius, a world-renowned chef, has been cooking and serving insects for years. According to Santtu Vekkeli, he’s even a local personality. Looking at his Instagram account, I understand why. His creations seem delicious and would make every mouthwatering!

If you thought that my recipes with insects are good, Topi is not competing in the same division. That’s the difference between an amateur and a pro!

I’m not the only one to have been seduced. In April 2017, he partnered with Coca-Cola for creating the first “Coke and insects gourmet menu“. What a way to make people excited to eat insects!

As I discovered and realised working at Livin farms and now at Jimini’s, people are interested in the process of breeding insects. What a better way to appropriate a new food source than knowing how it has been raised and fed?
An open and transportable small to mid-scale insect farm is the perfect tool for that.

Entocube has developed a small-scale cricket farm in a container. Is there something more exciting than that? More than just being a showcase, they have now four containers that produce 70kg of crickets every 35 days. They are currently working with the NASA to create a closed-loop food production system.
But that’s not all, Entocube is not the only company farming insects in Finland.

If you’re interested as I am in the insect as food and feed industry, the name of Ilkka Taponen should sound familiar to you. Before being a blogger and a consultant for insect farming, he’s a real expert on the industry. His thesis is the first and unique dealing with the subject of supply chain management risk in a high scale insect farm for food and feed. Since his internship in Ynsect, he’s now a consultant for insect farming and publishes on a regular basis unique insights about the industry on his blog.

In Detroit during The “Eating insects Conference“, I was lucky to meet Santtu Vekkeli from Nordic insect economy, an innovative Finnish company developing insect farming technology. Pioneers for farming insects in Finland, Nordic Insect Economy could also soon lead the Europe with their announcement.

With no pun intended, the Nordic climate could be ideal for farming insects. Insects are ectotherms animals meaning that their body temperature depends on the ambient condition.
For “flat” insect farms made out of concrete such as in Thailand, a warm and moist environment is ideal as it will naturally warm the insects.
As explained by Valéry Bonnet, thermodynamic expert during Insectinov conference in Paris, the problem is the opposite for high-density insect farms. When insects are bred in high density, the main issue is finding a solution to dissipate the heat emitted by the insects. A Scandinavian climate could be more adapted and would require less energy to regulate the temperature.

You’ve got experts, products, a media and audience attention. Now the regulation can open the market for promising results and allow people to eat insects.

Just as in Switzerland a few months ago, Grimiam opened the minds about eating insects. When the regulation allowed insects on the market, we saw innovative food products launched in supermarkets.

Opening the market at the right time

With companies in the insect industry working for many years to raise awareness and develop their expertise when the regulation allow insects as food on the market, big things are coming!

During the last weeks, several big announcements have been made, and we could expect more!

Fazer, one of the biggest Finnish food company, launched a bread enriched in cricket powder. Each bread contains approximately 70 ground crickets that will increase the protein content and add some vitamins.

A few days later, Nordic insect economy announced that the most significant food-grade insect rearing facility in Europe would be founded in Finland. It will produce several tons of insects per year.
And what will be the use of these insects?

They just announced that Mattila Bros a local meat processing company will soon start using insects as food as a sustainable source of protein.

As we often think about crickets, grasshoppers and mealworms as insects to eat, the most significant honey producer in Finland would also be keen to put bee drone larvae as food on the market.

While these announcements are already promising, why am I particularly excited about the development of the industry in Finland?

During my travels, conferences and calls, I’ve been lucky to have been in touch with several Finnish people involved in the sustainable food industry.

When developing the “meat alternatives” industry, we often claim that we don’t want to see meat as competitors. In Finland it’s different. Insects products and other meat alternatives are not only for the adventurous and conscious eaters, there are developed with the intent of being eaten by everyone as a staple food.

While in Brussels attending a workshop for the European Commission, Tina Hansen, CEO of Gold&Green Foods claimed that their famous “pulled-oats” is here to be a meat replacement for everyone and not only the vegans and vegetarians who are already convinced.

As Ilkka Taponen wrote on his blog post How We Changed the Legal Environment of Our Startups :

“For emerging industries many times the competition is not the companies doing similar things than you, but the companies you are coming to steal the market from. This essential idea is widely spread in the small Finnish industry, and now we all share the fruits of co-operation.”

We saw during Slush HK a few days ago that people also seem to be excited to eat insects. Now that the regulation is clear, all the green lights are here, but will it catch on?

Robert Nemlander, CEO of Entocube explained for Food Navigator:“Now that the legislative hurdle is out of the way, creating a vibrant market for edible insects is now in the industry’s hand and we will have a fair opportunity to succeed or fail.”