For this post, I will call the F.B.I “Florian bug investigation” to solve a case! You’ll learn everything about cricket, katydid and grasshopper! 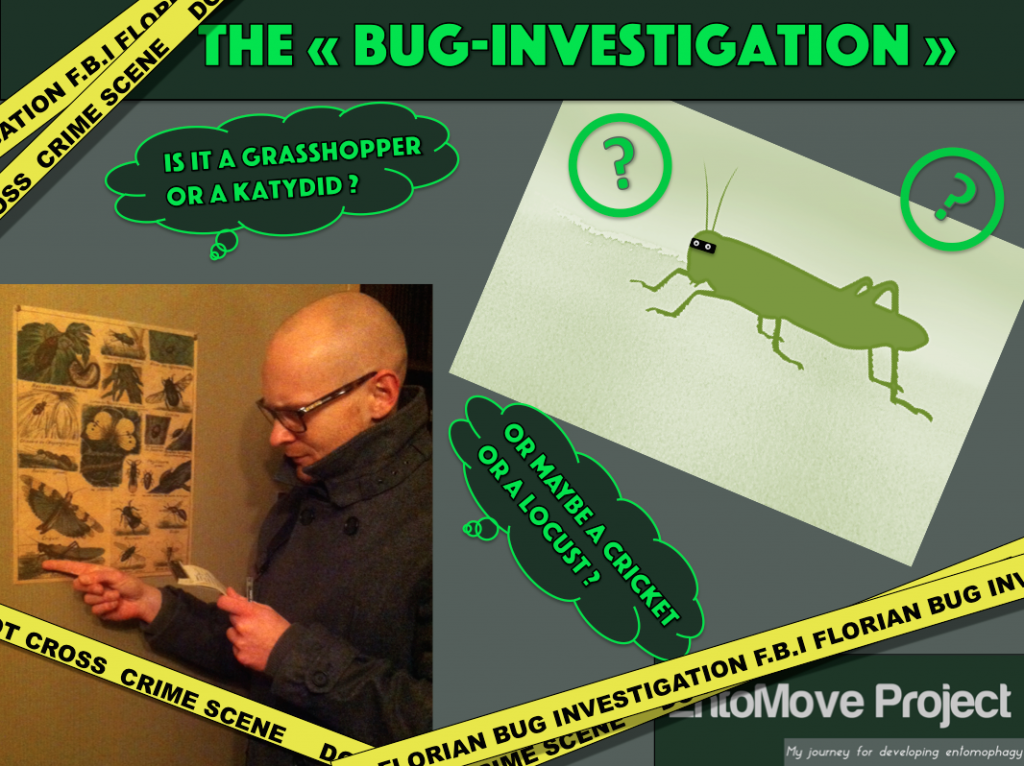 The scene crime : A crop has been eaten by an unidentified specie and I need the help of the bug-inspector to find which insect has committed this crime!

Some potential suspects have been identified :

Why talking about cricket?

I first planned to make an “Edible Orthopteran World Tour” with some examples of different katydid, grasshopper, cricket and locusts eaten all around the world but thanks to my mom I changed my plan!

When I brought her some crickets for my taste-review . Our conversation was :
-“It’s good! So, this a grasshopper, right?”
-“No mum, this a cricket!”
-“And what about katydids, what are the differences?“.

I realized that I wasn’t able to give her a clear answer…So I decided to work on the subject and I wanna share my results with you but a with a little bit of fun (talking about ovipositors and cerci can be boring for some of you…) I hope you will enjoy it! We won’t speak much about food in this article but don’t be sad, this article will be the perfect introduction for my “Edible Orthopteran World Tour”.

Let’s start our “bug-investigation : Can I see your papers, please” – The binomial name & the misunderstandings between the languages

For being able to clearly identify clearly our culprit, the bug-spector will need to work with the “binomial name”. It’s the latin name that is defined through a well-established hierarchy. As it is unique for each specie regardless the language, no misunderstanding will be possible! 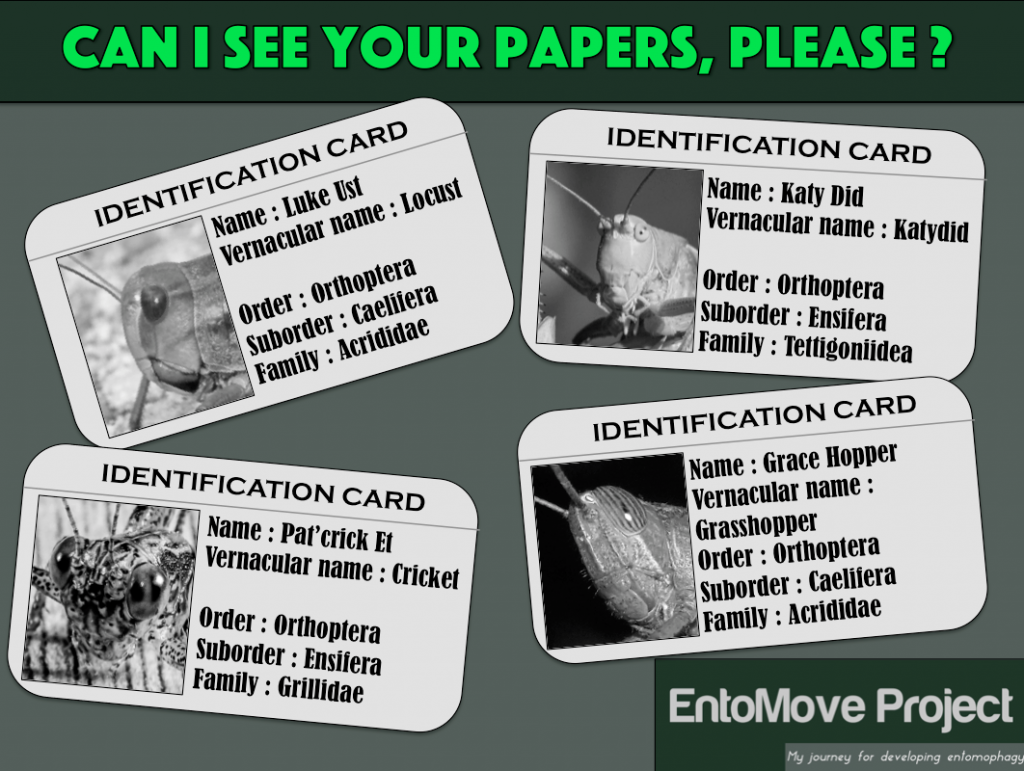 We will see now that some problems are possible if we use different languages… Here is the example between the english and the french language:
The word “cricket” comes from the french “un criquet” but in french it is “un grillon“.
A “grasshopper” which is very alike “une sauterelle” is in fact “un criquet”
And “katydid“? Easy, let’s call it “une sauterelle“.
A “locust” is “une locuste“! Yes, that is easy! But in french, we very rarely use this word and prefer “migratory grasshopper” instead… 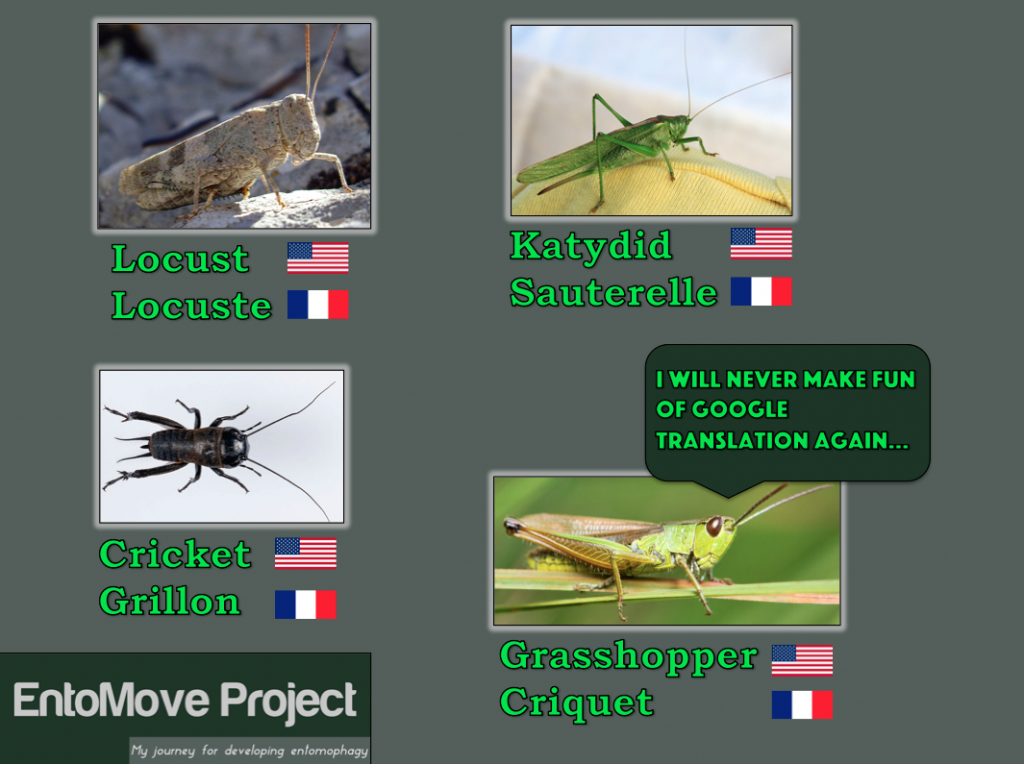 You understand better now, why is it so hard (This one is for you DGG, I hope you will like it!) for the F.B.I (Florian Bug Investigation) and the C.I.A (Checking Insect Authentification) if they want to work together and they don’t speak the same language!

Profiles of the suspects – What are their common points?

It seems that our 4 suspects are belonging to the Orthoptera family so let’s start with a surveillance in order to know better this family… It will be easier for the bug-inspector to find the culprit if he knows the common points of all the potential suspects! 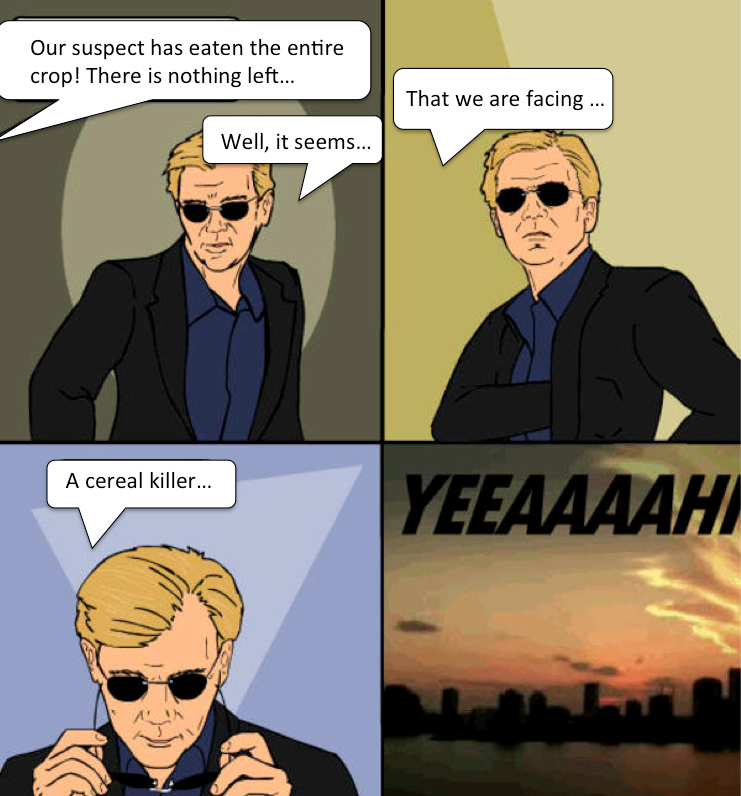 Thank you so much for your help Horacio!

They all belong to the Orthoptera family (which means “straight-wings” in greek).
The Orthopteran family is composed approximately of 24,000 different species1 of grasshoppers, katydids, locusts, crickets and some other members. These other members are the wetas and the mole-crickets.
There are more than 11,000 species of grasshoppers; 6,400 of katydids; 900 of crickets and 12 of locusts.
Note : All the different families of insects are defined by the characteristics of their wings.

Katydids, crickets, grasshoppers and locusts have in common their hind legs that allow them to jump. This capacity of high jumping is also useful for a safer take-off.1

Most of these insects are “singing”. The scientific name for this song is the “stridulation“. They produce this sound by rubbering some different body parts together. For the cricket, it is commonly said that he is chirping.

They all have an incomplete metamorphosis. (Except the wings, the juvenile looks the same as the adult, they only grow in size). The scientific term is “paurometabolous”.

If at first glance, they all look the same, there are a lot of little differences just in front of us! The inspector needs to seek the clues in order to find the culprit. 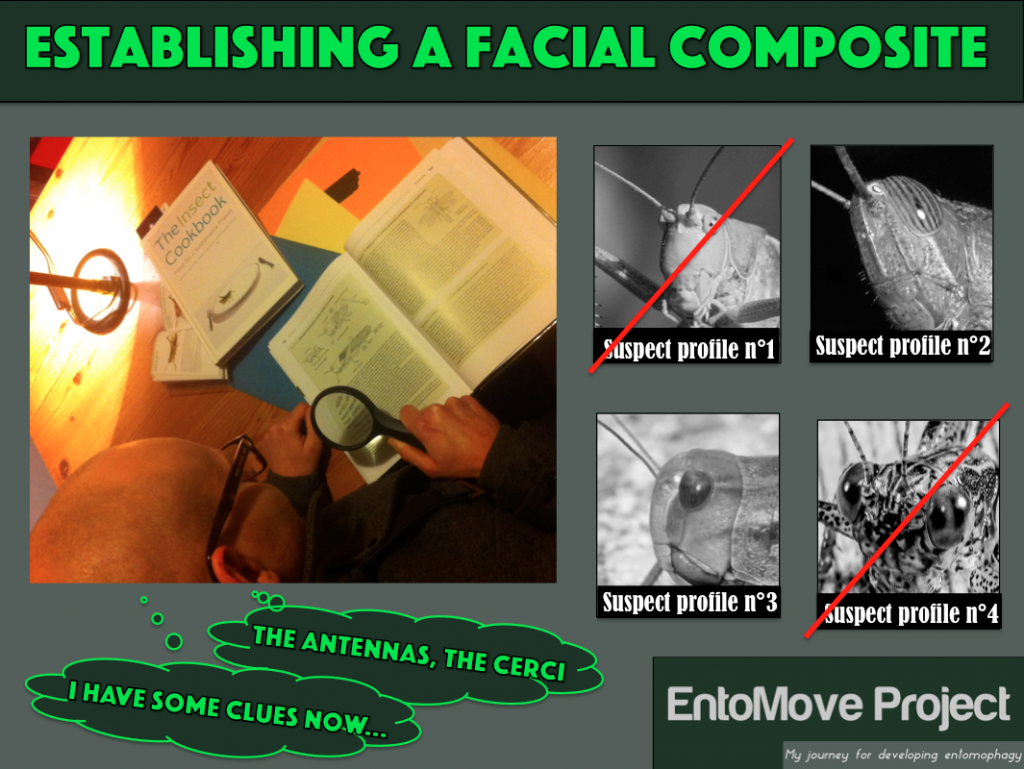 When I take a closer look, I don’t think he’s working so much…

The easiest way to differentiate a caelifera from an ensifera is to take a look at the antennas :

The female of the cricket and the katydid have a longer and more visible ovipositor than the grasshopper and the locust. The ovipositor is used for laying the eggs into the soil.

We saw that the katydid and the cricket have both a long ovipositor. In order to differentiate them, you can take a look at the cerci, they are more visible on the cricket. If you don’t see them, it doesn’t mean they don’t exist, even when they are small they are useful. The cerci are full of sensory cells that areimportant for their reproduction! Don’t worry, that’s not a weapon!

Clue n°4 : The shape of the hind-legs

We can also differentiate a cricket from a katydid by their hind legs. The hind legs of the katydids are close to the body. For the crickets instead, they are slightly apart from the body.

Not a real clue : The color

The color is not a deciding factor. We can only say that crickets are rarely green. The solitary locust is often brown, adults swarming are black and yellow and immature are pink2. The grasshoppers can be green or brown but some of them can be orange, pink or even red and blue.
For example : Check out this awesome Dactylotum Bicolor.

Not a real clue : The ability to fly

The size of the wings and the ability to fly are nor a deciding factor : Only the locusts are all able to fly, some crickets, katydids and grasshoppers can have atrophied wings that don’t allow them to fly. If you take a second look at the previous picture, you will see what the atrophied wings look like.

The questioning – The differences in the manners and behaviors

By taking a look a closer look at them, we have seen some physical differences. The noose is tightening for our culprit, but that’s not finished! The F.B.I needs to go further. They show also different manners and behaviors. The inspector will now proceed to the questioning to know the habits of the suspects. 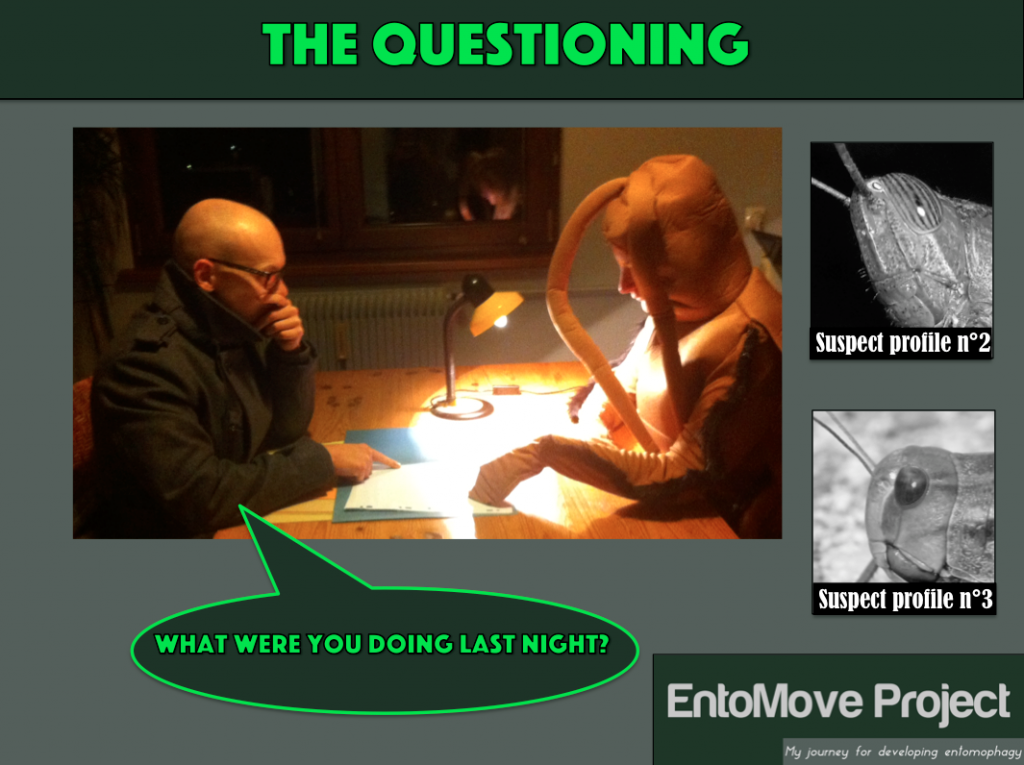 I thank my sister for this fantastic role! You deserve an Oscar!

Question n°1 : Do you have some accomplices?

On the 11,000 species of grasshoppers, only a dozen can turn into “locusts”.
A green or brown grasshopper lives a solitary peaceful life, but some of them can turn into their darker alter-ego, the locust. It happen when they are too much in a little space for a long time that lead to a battle for food.
This overcrowding causes a release of serotonin. The grasshoppers become bigger, change their colors from green or brown to black and yellow, they eat more and are able to fly longer. They are now some swarming locusts which live with gregarious manners.
On their sides, crickets are generally gregarious whereas the katydids are solitaries.
There is an exception for the Mormont cricket, but don’t be so impatient, this little guy will have his own chapter in the “Edible Orthopteran World Tour”)

Question n°2 : What are you eating?

As grasshoppers are vegetarian and eat calmly some grass, locusts will become omnivorous and will eat almost everything that can contains some cellulose including grass, crops, leather and even the fence posts and the wool of the sheeps!3
Crickets are omnivorous scavengers. They feed on organic materials, fungi and seeding plants.
The katydids are omnivorous too but some species can be carnivorous and feed on other insects.

Question n°3 : Where were you last night?

During the day, generally a cricket or a katydid stay hidden and leaves his hideaway at dusk. They are nocturnal insects that’s why it is more common to hear a cricket stridulating at night. The grasshoppers and the locusts are diurnal insects and you will be able to see them during the day.

We saw earlier that most of these insects are able to sing, but these stridulations are different. They are different by how it sounds and how it is produced. The grasshoppers and the locusts produce their song by rubbing their hind legs with their wings. The crickets and the katydids rub their forewings together for making the stridulations.

The sentence – Are they all edible?

The case is solved! Our culprit was the locust! And as a sentence, he will be consumed dried with some spices! (What a barbarious sentence…) But are all these species edible? 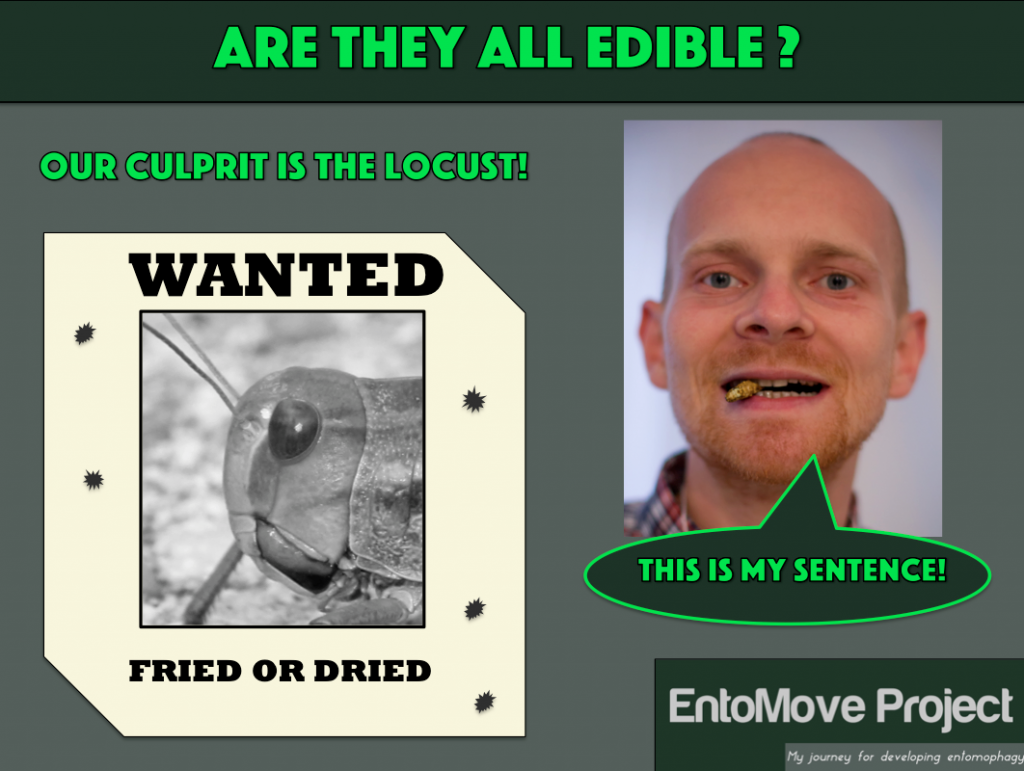 For giving a general answer, I will quote The Bug Chef, David George Gordon4 :

Red, orange, or yellow – forgo this small fellow. Black, green or brown – go ahead and toss him down.

If they show some shiny colors, it’s surely a warning-signal for saying “Don’t eat me, I’m toxic“. If they are brown or green they maybe want to try to hide the fact that they are delicious…

There are approximately 250 recorded species of Orthopteran eaten all around the world. That is only the recorded species, there must bea lot more of them that are surely edible!

Insects taste what they have eaten. So carnivorous katydids or grasshoppers who have eaten some toxic plants should be avoided.

An entire post, “The Edible Orthopteran World Tour” will be dedicated for these edible singers!

After the work, relaxation – Some facts about these insects

After this hard investigation, our inspector deserves some relaxation!(By the way, you too!) So here are some funny and interesting facts about these insects!

The crickets and the katydids have their ears on their legs whereas grasshoppers have them on their abdomen.5

The biggest swarm in history according to The Guinness World Records occurred in 1875 in Nebraska. The specie involved was the Rocky Mountain Locust (Melanoplus spretus). This swarm weighed an estimated 27.5 million tonnes and consisted of some 12.5 trillion insects! And less than 30 years after this gigantic swarm, this specie was completely extinct… (For more information, about this story, check out this video3)

There is a more lucrative way than rearing crickets for food. In China, cricket fighting is very popular and some crickets can be sold more than 2,000$ in the black market.6

The famous artist Salvador Dali was totally scared by the grasshoppers. He saids : “If i were on the edge of a precipice and a large grasshopper sprang upon me and fastened itself to my face, I should prefer to fling my self over the edge rather than endure this frightful ‘thing'”.7
The phobia of insects is called “entomophobia”.

Despite the fact that a dozen of species are considered as locusts, the migratory locust (Locusta Migratoria) is the one and unique member of the “Locusta” gender.

A specie of grasshopper that lives in a solitary way had unusually swarmed in New-Mexico. According to the scientists, “it may be a first evolutionary step towards this specie becoming a locust in a distant future“.8

From a personal point of view, I had really appreciated working on this post. For me, it was very fun and instructional. I learned a lot of things, that I’m sure will be useful for my future works!
I hope you had fun too and you enjoyed this post. Maybe you had even learn something about these jumping fellows!
If you liked the main idea of this article and if you want to improve it, give me some advices or correct some eventual mistakes, I’m all ears! (on my legs)

Take care of you! 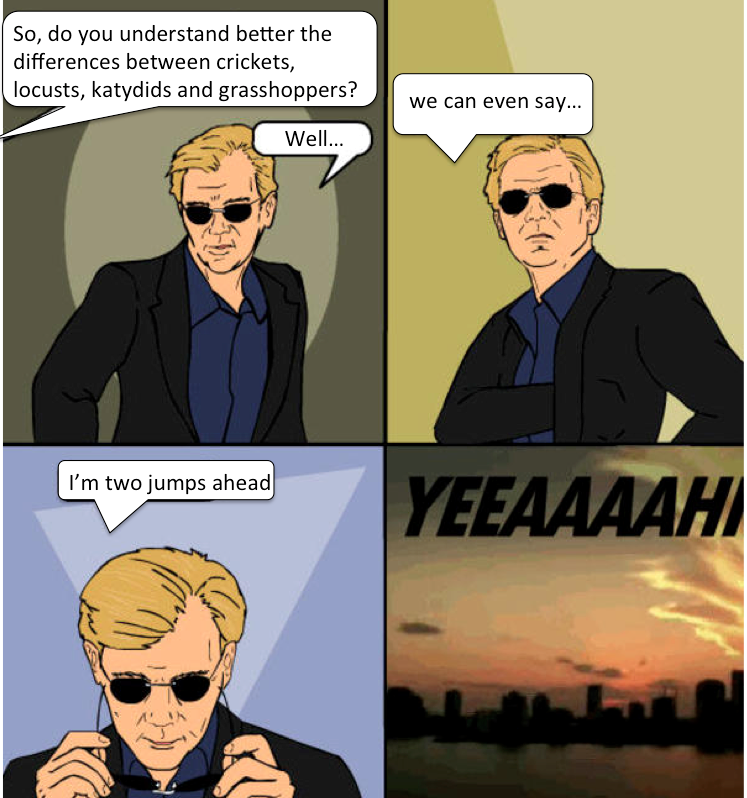 Horacio is ready for the “Edible Orthopteran Tour” and you?