Last week, I told you that, this week-end I will make another review “but I didn’t know which product to taste“, the choice was too hard so here is something different (and also because I wanted to react about a very interesting study!).

The only image I found for illustrating this post is just simply me looking at you. 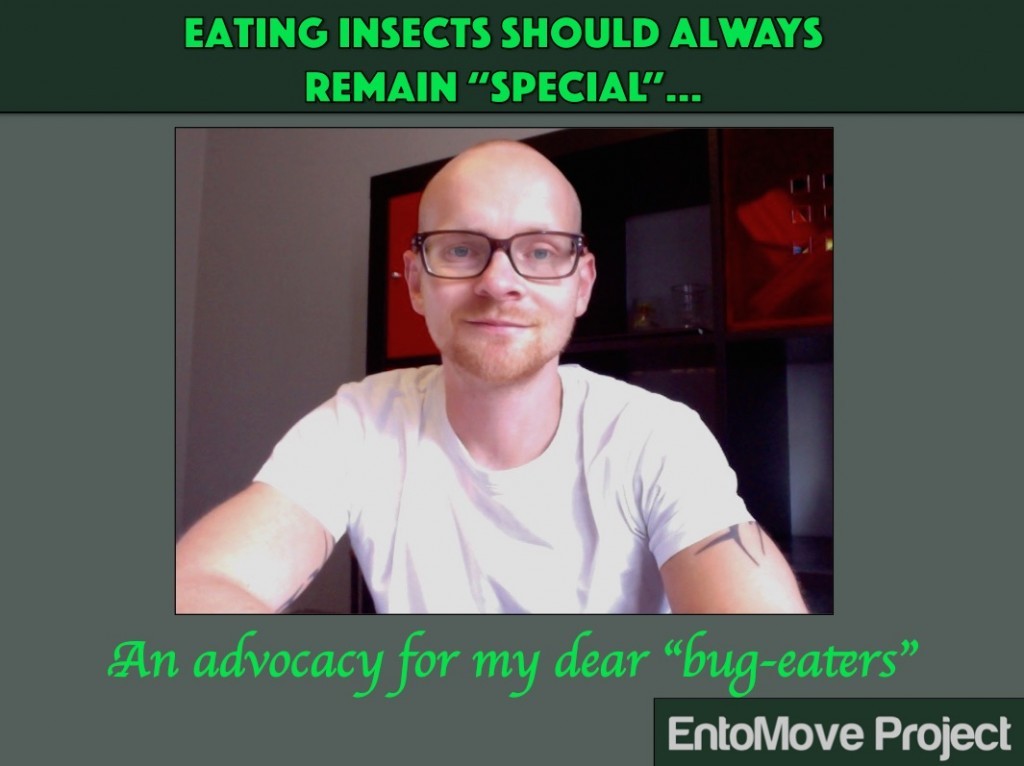 Have a nice reading!

My dear “Bug-eaters” – A little introduction

Entomophagy and edible insects are gaining more and more interest in the medias, sometimes negative but more oftenly it’s positive. A study revealed that in order to developing entomophagy insects should not be eaten for “the environment” but rather for “fun“.

I agree with “the environment” fact for 2 reasons : First, and once for all, yes there are some enormous potentials but we can’t quantify exactly the environmental benefits of rearing insects (neither their nutritional values). Secondly, we live in a world where food is often synonym of anxiety. “What is it?” “Where does it comes from?” “Is it safe?” “Is it nutritious?” and now adding the question”Is it sustainable?” won’t probably help for developing entomophagy.

Before finding “new solutions” such as fun, hiding the insects, creating products and recipes, changing their names in order to develop entomophagy and gain more acceptance, let’s stop for a moment. I want to simply thank all of the early Western “Insects-Eaters” and tell you that you’re amazing. You answered positively to all the previous questions and you accepted to eat insects and tried entomophagy… (I hope you had a good experience!)

You are what you eat : You’re amazing

First literally, insects are amazing creatures. You can fear them, hate them, love them or be fascinated by them but nobody can’t ignore insects. They’ve been on earth for a long period of time and have conquered almost every territory on the planet. There is more than 1 Million species of insects and they may dominate the food chains and food webs in volume and numbers. Literally, insects can be considered as the most successful living organisms on our planet.

Secondly, when you’re incorporating a food, you’re also incorporating all of its values and the true values of entomophagy are great. Eating insects is not just “good for the environment“, “for the health” or “for fun”, it’s more than that, for me, it’s a whole thing, a way of life. It’s the desire of discovery, an open-mind, a willingness to try something new, a respect for food and the environment, it’s going through the mental barrier, doing something unexpected, it’sa real connection between past, present and future, between you and the world.

At last, just the action itself of eating insects for a Westerner is simply amazing. I also thought that “Well, it’s nothing, more than 2,5 billion people around do it daily and our ancestors did it too” but I changed my mind. Excepting a few “people considered as crazy”, it’s something that has never been made in the Western modern history.

We are living at a period where there have never been so much variety on the shelves, new marketed and appealing products are launched almost every day, every well-known product is available at any period and despite all of these you chose to eat something unknown and “unrecognized” in your culinary field. You made the choice of ingesting something that, for during a long period of time, you considered as everything (often bad!) but not food… Even if you did it once, it’s a definitive entry, an irrevocable act.

According to the french sociologist, Claude Fischler, the specificity of being omnivorous leads to a paradox (L’homnivore, 1990). Our diet is flexible; so it’s as a same time a chance and a source of anxiety. We are always torn between the fear of the unknown and our desire of discovery. And you, made the choice to break this mental barrier, your desire of discovery exceeded your fear of the unknown, so : no “it’s like eating a chips” it means a lot more.

That’s why the act of eating insects should always remain special. Insects will maybe, one day, mainstream in the shelves and in the regulatory texts, but we also should do our best to try to keep entomophagy extraordinary.

Developing entomophagy will be a collective and a hard work, but you were the first to embrace the values, you took the risk, believed the entomophagy benefits and so you deserve the best products : Some that are “good to eat” regarding their safety, taste and nutritional values but also “good to think” regarding their symbols, appearances and their sustainability.

In 10 years, insects will surely be on every shelves and every (good) restaurants, but I hope we won’t let them end “as a simple source of proteins” and so, no matter how hard will be your day, each time you will open your cricket box, the time will stop, you will feel good and have the same smile as your first early crunchy bite.

For ending, eating insects should stays special and not finish in a “undefined processed food” for a simple reason : respect. Respect for food, for the insects, for all the people who dedicated their lives to entomophagy, for every people all around the world who consider insects as a high-value food and even totem-food, for our early ancestors as our future generations and at last also for you, the first who truly embrace the cause.

I truly believe that people who are eating insects are slightly and progressively changing the world for a better place. You can think that I’m going too far, you don’t have to agree with me, that’s totally OK.

But at least, let the children believe that. During your childhood, you’re building your culinary field as much as you’re builded by your food choices (you can trust me on that!). So, if they are trying to eat insects, they are eating something that can be delicious and that is good for the environment and for their health.

We need to tell them that they are also doing something extraordinary that we didn’t believe possible some few years ago and that we were probably more reluctant than them(“Hey, when I will have kids they will eat mealworms, crickets and grasshoppers” said no parent ever).

They are also eating, so sharing the values, of the dung-beetle, the little brother, who never gives up, who always bring his little ball to the top, no matter how hard it will be. They are also incorporating the properties of the little sister, the leafcutter bee who always finds its way back home. (They don’t need to know the story of the aunt Praying Mantis!).

We could also tell them that they are doing exactly as the first humans and also just as their friends from all around the world, but just let’s them simply enjoy their delicious crickets in peace!

Now, it’s a promise : Next week, it will be a new review!

If you enjoyed this kind of article and want to discuss more deeply about this subject feel free to leave a comment.