Today, it’s the third and last part of my posts about the place of insects in the paleo diet. For this last paleo trip, here is the menu :

Before reading this post, you can begin with the 2 first parts :

Put your wild beast fur on for the last time, we’re going back to the paleo period! 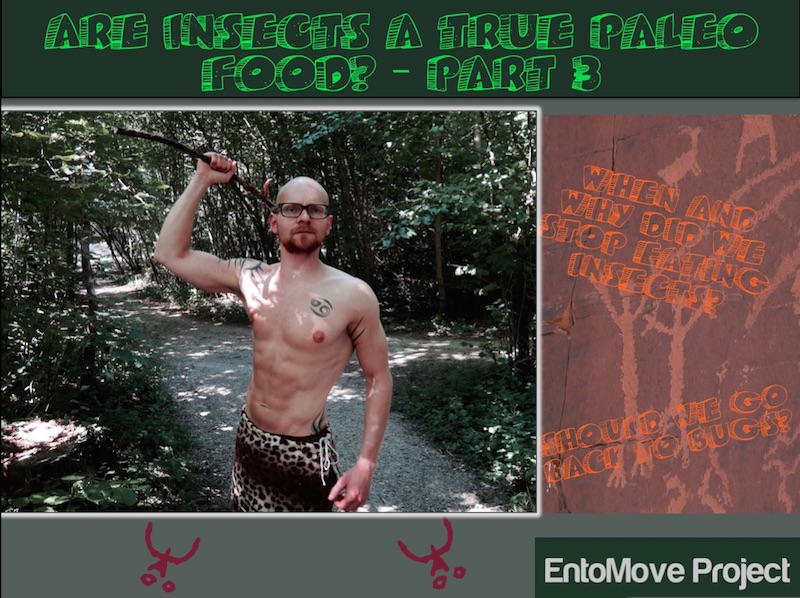 Despite the little information available on the subject, it’s now clear that the first humans ate insects. As they are nutritious and easy to catch, insects were oftenly eaten during the paleo period. Moreover, they were not a food of scarcity, but they were respected. And for finishing, they were not only a source of proteins but also a source of fats, carbs and vitamins.

So, why aren’t we eating this super-food in the Western anymore?

When and why have we stopped eating insects in the Western?

The act of eating insects never really spread and developed in Europe and in North America.

If you’re interested by the subject, you should really visit her website : www.entomoanthro.org, she’s really an expert in the field!

Do you remember the scene depicted in the first part? The hot and moist climate, the heaven for finding big and delicious insects?

Well, all the nice stories about the paleo-bug-banquet changed when the humans arrived in tempered climate…

In continental climate, insects are less big and are not available all year round. So, as there were less present, their importance in the diet decreased and they were replaced by big animals. Yes, Neanderthal was a good hunter! 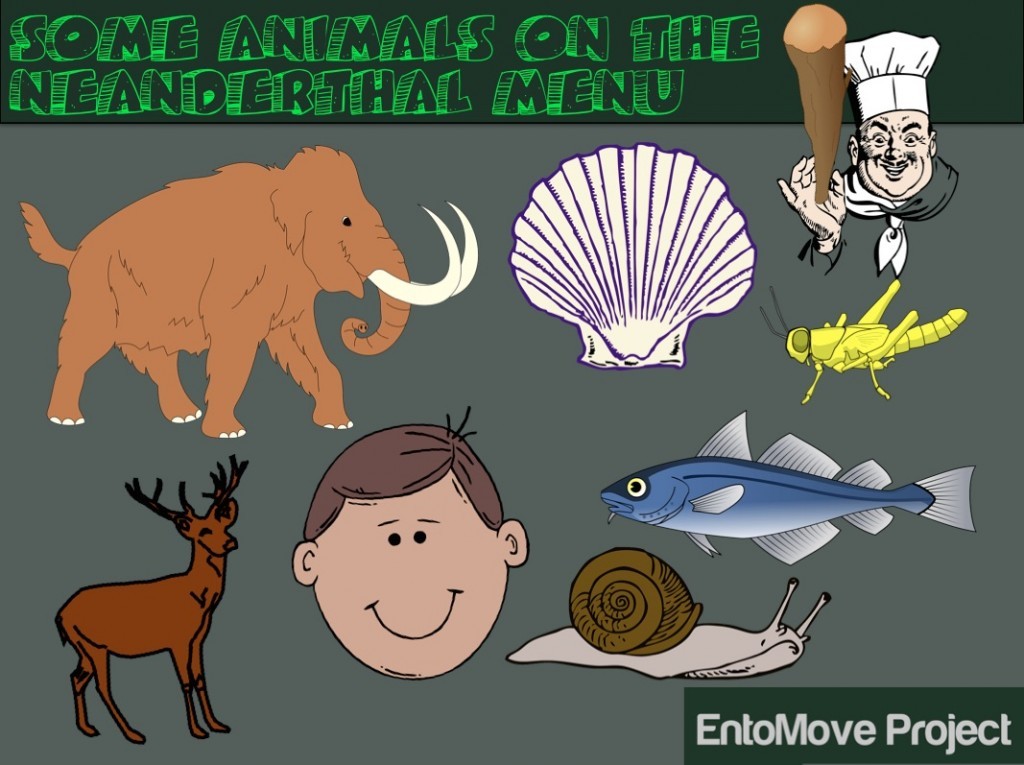 Yes, there was a large “variety” of nutritious animals eaten by the Neanderthals!

Things started to go really bad for these little fellows at the end of the Paleolithic era. When agriculture aroused, insects, which could also eat crops and invade the supplies, were in direct competition with humans for obtaining food.

The domestication of big mammals, which were easier to park, could provide food but also milk, wool and transport were another reason for the decline of the bugs.

With the settlement in closed and private houses, the lovely bug living with us could have become an undesirable and uninvited neighbor that invades our living space.

More over, with people living in high density and close to animal, insects could have become a vector of diseases.

Until the XIX century, a common belief was that flies “magically” appear in dung.

So with the settlement, the agriculture, the domestication and the progressive decreasing contact with insects and nature, the #paleo food of the tropical climate became the #neolithic pest of the tempered climate. 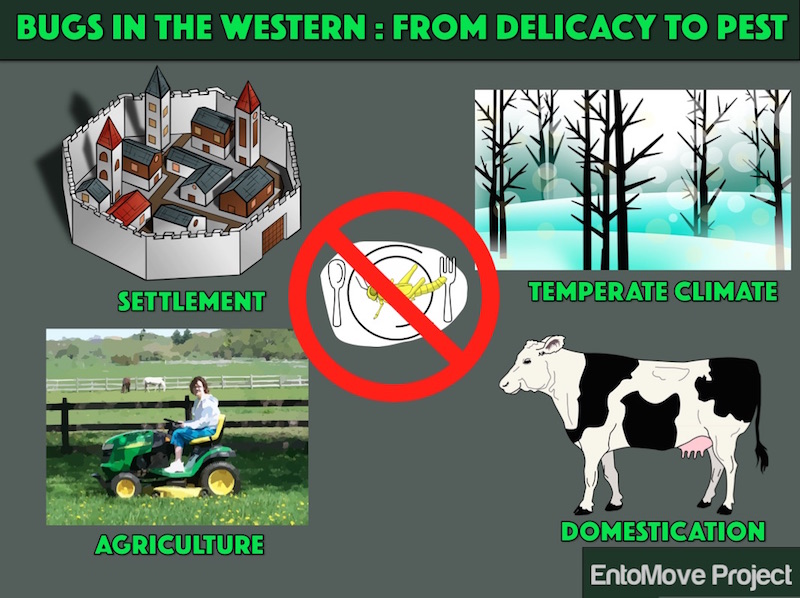 Even if the act of eating insects as never been a big part of the modern Western diet, there are some traces of insects consumption in different periods.

So if insects have never been a real part of our diet, should we, as our first paleo ancestors, go back to bugs?

Should we go back to bugs?

Well, that’s the final part… At first, I wanted to write a long paragraph called “why we should insects” for convincing you but I changed my mind.

As I understood during reading all of these studies, eating is the most personal thing, we are expressing ourselves by how and what we eat.

I will only say that if our early ancestors ate them with respect, if the last hunters and gatherers crave them with passion and if more than three billions of people consider insects as delicacies, they are maybe more than just a “fad”…

Let’s finish with a personal thought. In 1985, an American anthropologue, Marvin Harris explained the different food choices were defined by costs and benefits :” How many calories and how much time is needed for obtaining a certain amount of nutrients? ”

Even if this theory occulted the taste and the cultural aspect, we can try to adapt it to the modern issues : “How much water, land and energy are necessary for producing a certain amount of nutrients?”

So, yes we should maybe go back to bugs, because, believe it or not, we are truly changing and affecting the world by what we eat… And bugs have a lot of benefits.

Whoa that was profound… Here are some quotes from an old french book for ending this post.

Some paleo quotes from an old book

The idea that insects as food are related to human evolution is not new. Already in 1941, the Doctor Emile Bergier proposed this idea in his book “Insectes comestibles et peuples entomophages“. 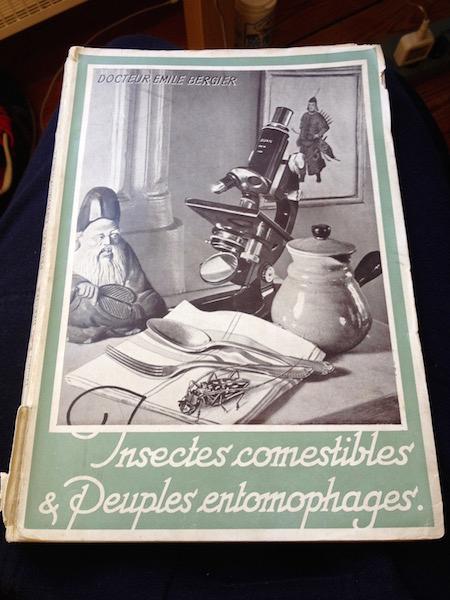 Here are some some quotes I chose for you :

Since the birth of humanity, insects have always been and are still one of the first natural element of mens diet.

The tribes who eat insects are an ethnographic survival of the old primitive tribe, because men, like Vogt already attested, is not carnivorous by nature but derived from an insectivorous origin.”

Well that’s the end for these paleo articles, I hope you enjoyed following me in this adventure. (Maybe you’ve even learn something!)

http://www.entomoanthro.org : The website of Dr. Julie Lesnik an expert in anthropology and entomophagy.

http://askentomologists.com/2015/02/09/why-dont-we-eat-bugs-in-western-culture : An interview from Julie Lesnik “Why we don’t eat bugs in Western culture?”