Today is a beginning of serious and scientific series of posts! There will be no jokes or funny pictures of me dressed like a caveman… Only pure science!

The main subject will be the link between the “Paleo” diet and insects. But not only, as I was working on this post, my finger didn’t want to stop writing on the walls.. 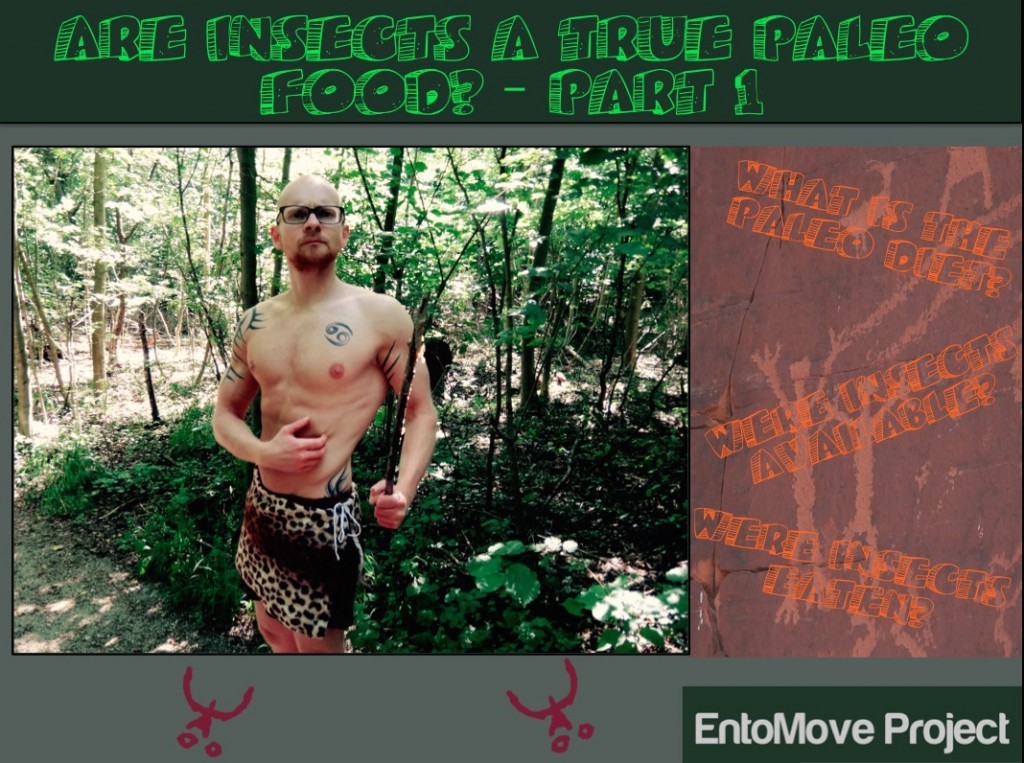 As I just noticed that there are lot of questions that I would like to understand and share with you. It’s getting far deeper than the initial subject, so this article will be in three parts : (it’s for the suspense!) :

Fasten the seatbelt of your time machine, let’s go for the first part of a anthropo-paleo-ento-food-adventure together! I hope I won’t lose anybody during this journey… All the staff members of Paleo-Airlines wish you a good flight. (Some roasted crickets will be served during the travel.)

I will start simply by : There isn’t a “paleo” diet… The idea of movement is based on the fact that we should only eat the food we’re genetically adapt for. And we’re genetically adapted for the food that was available at the pre-agricultural period, the Paleolithic period where the first humans were still hunters and gatherers. That’s during this period that our body’s and brain’s biggest evolution occurred.

We have a paleolithic body living in a post-industrial world. Abrams (1987)

On the internet, you can find a lot of different food pyramid for what we should eat if we want to strictly follow the Paleo Diet : some with a lot of meat, some with a lot of fruits and vegetables but not any with bugs… So were insects here?

And guess what : We’re omnivorous and our specie spread early all around the world and evolve in accordance with the food available and the surrounding environment. For having an idea about our early ancestors ate, the scientists studied the diets of more than 200 of actual hunters-gatherers tribes. Even if in general, they conclude that the main source of energy is coming from animal sources (energy, not quantity!) there isn’t one “Paleo” Diet but all of these diets can be very different… 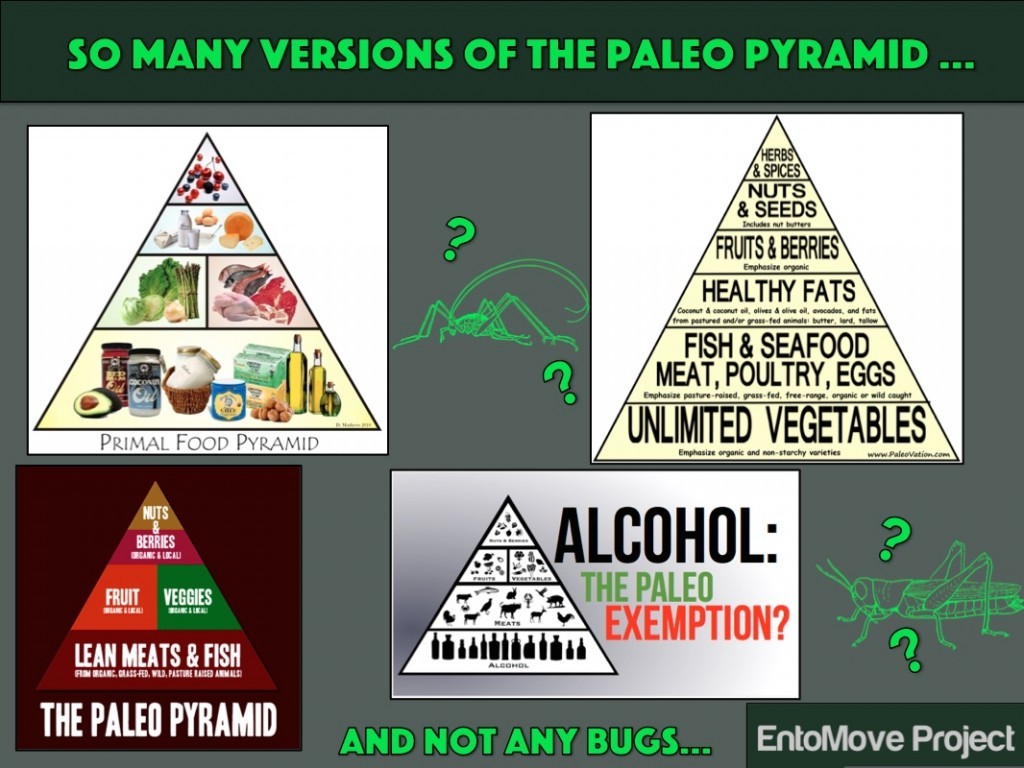 We can go further, even if our early ancestors were true opportunists, the cultural aspect and the different reactions with specific food could have also play an early role for defining the firsts different “Paleo” diets (Don’t ask me since when… By the way, if you have some information about this, I’m all hearing!).

So briefly, following a “Paleo Diet” is eating organic food such as :

All dairy products, cereals and processed products should be avoided.

All these ingredients were more or less available at this period, but if I can’t find insects in any list, maybe it’s just because weren’t there at this time…

Were insects available at the Paleo period?

First, I will try to caliber my time machine at the right period :

When human evolution is considered, there is general agreement on the close relationship between a diet of high quality and the elevated metabolic requirements of an expanding brain, whose growth becomes especially noticeable with the emergence of Homo ergaster around 1.8 Mya (Tommaseo-Ponzetta)

The most eaten orders nowadays are :

All of these little guys appeared at almost the same period : between 300 and 200 Mya. (Regarding insects were not at 100 Millions years here or there!) So, they were already there and in large quantity long before us…

The “Paleo diet” states also that the food should have remained the same since the early times (which is, by the way, very hard regarding the thousands of years of breeding and selection…). Most of the insects today are morphologically semblable since the ones found 2 Mya.

Cereal Info : (NOT PALEO!) Wheat, which is the most common grown cereal in the world, has changed a lot since its appearance 10000 years ago. The modern wheat possess 21 chromosomes whereas its ancestor the small spelt possess only 7.

So : The early humanoids “appeared” and developed first in hot climate 1,8 Mya. The insects (which are cold-blooded and also love this climate) were already clearly established at this period. The world was probably not so different as today, a planet full of insects and with some few other furry animals giggling around.

Also, I’m not taking a lot of risks by affirming that our early ancestors and insects should have met during the Paleo period. But this close relationship doesn’t mean that insects were ingredients of the firsts “Paleo” recipes… We know that they were available, but first are they nutritious?

As I wrote in one of my first post “Insects are full of proteins!” but not only.

The last edition of “the list of edible insects” has been published on the 1st of June 2015 and now counts 2037 species recorded as edible. As our knowledge are growing and also because of our underestimation of insect’s importance and the difficulty of collecting information, this number increases periodically. (Last year, it was 1950 and it was only 500 in 1989!)

As all of these species can be very different, so can be their nutritional values. Moreover, the nutritional values can change according the diet, the stage of development and even the castes of social insects. (So simple!) 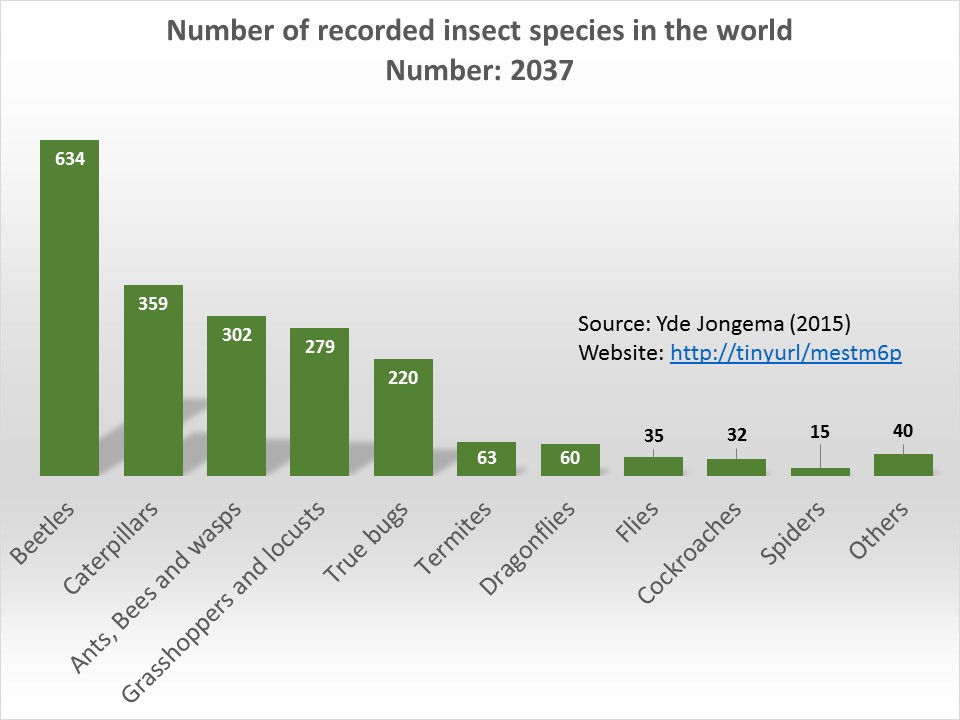 In accordance to this variety, it is possible to separate edible insects in 3 “families” regarding the main source of nutrient they are providing :

Okay, a little progress has been made : There were a lot of bugs at the paleo period and they are tiny packages full of energy, minerals and vitamins. But their availability and nutritional values doesn’t clearly prove that they were eaten…

Where insects eaten during the Paleo period?

As it’s a little hard to ask directly a true “Paleo” if he (or she!) eat bugs, we’re gonna first take look at our closest cousin : The chimpanzees.

Even if for a long period time a common belief was that chimpanzees diet was essentially based on fruits, we now know that insects are important for them and can represent a great source of energy. (They even use tool for collecting more efficiently termites, if it’s not a sign of true appetite for bugs…)

Let’s get closer and take a look at our last “Paleo-Bro”, the lasts tribes of hunters and gatherers.

It seems that even the people of the Great North are not against some few deer lice! 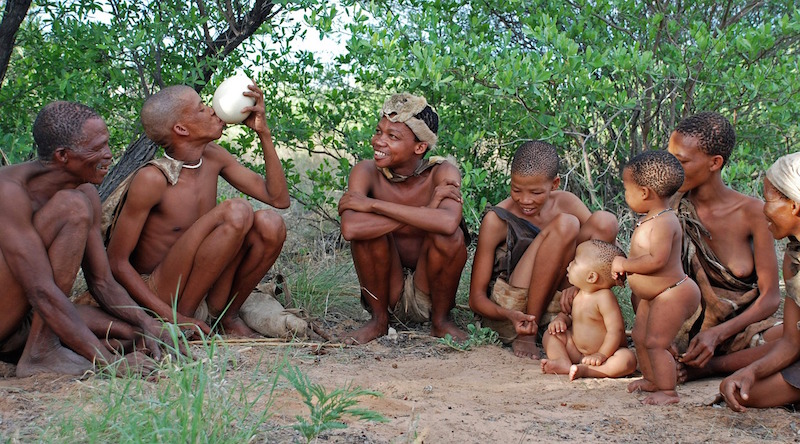 Well, the lasts Paleo-tribes and our closest Paleo-cousin eat bugs but what about our ancestors?

It’s very hard to find some direct evidences in the archeological fossils. First because insects exoskeleton is fragile so all the legs, antennas and other body parts must have disappeared.

But the main reason for the lack of evidences is because almost all of the researches and studies have been made through “Western glasses“. As insects are not eaten here, the hypothesis of their consumption has not been included in the field of research. In other words, here is how the blog author “Paleoveganology” (thanks Daniella Martin for this discovery!) described the study used in my introduction :

In short, there are no bugs or worms in this paper. It’s as though someone took a big can of Raid to the authors’ paleo-imaginations. So steeped are they in their Western food bias and paleofantasies that the possibility of Paleolithic man fulfilling his nutrient requirements with a diet of creepy-crawlies never occurred to them.

But it should have. Insects, grubs, worms and other terrestrial invertebrates have long provided humans and other primates with nutrients, and continue doing so today in most parts of the world

Funny exemple found in the literature : The French historian Anthony Rowley described our ancestors as hunters of small game such as snails and frogs. (Do you want a paleo french baguette with that? If an illustrator is here, we can make a very funny picture with that! I pay with crickets…)

Info : Another French author, Bruno Comby in 1990, developed the idea that eating insects is linked to human evolution and so that it’s essential to eat them. Jean Seignalet, a french doctor, thought that a lot of actual diseases could be cured with “an ancestral diet” but didn’t give a single word about insects…

Most of our evidence comes from the Upper Paleolithic (between 20,000 and 10,000 years ago) (or just a few days ago regarding the human history). For example, a wall painting dated from this period depicting the harvest of honey was discovered in South-Africa, a bison bone with a grasshopper carved on it (Paleo-goodies!) has been found in France.

A more “recent” evidence (5000 years ago, which is strictly not during the Paleo period!) has been depicted in 1987. Thousands of fragments of grasshoppers have been found in a Utah cave which were frequented by tribes of hunters-gatherers.

Well, with all these informations it seems more logical and obvious that our early ancestors ate also insects… In the next episode we will try to understand together what was the role of insects in the real different “Paleo-diets”.

I hope you had a good first part of the travel, that’s already the stopover… If you want more information (or give me some), feel free to ask here.

And here is the second part : “Are insects a true paleo food – Part 2”

I’m sure that now, you can’t wait for the second part… But that’s not for next week… I will be eating insects at “The Archipelago” in London! 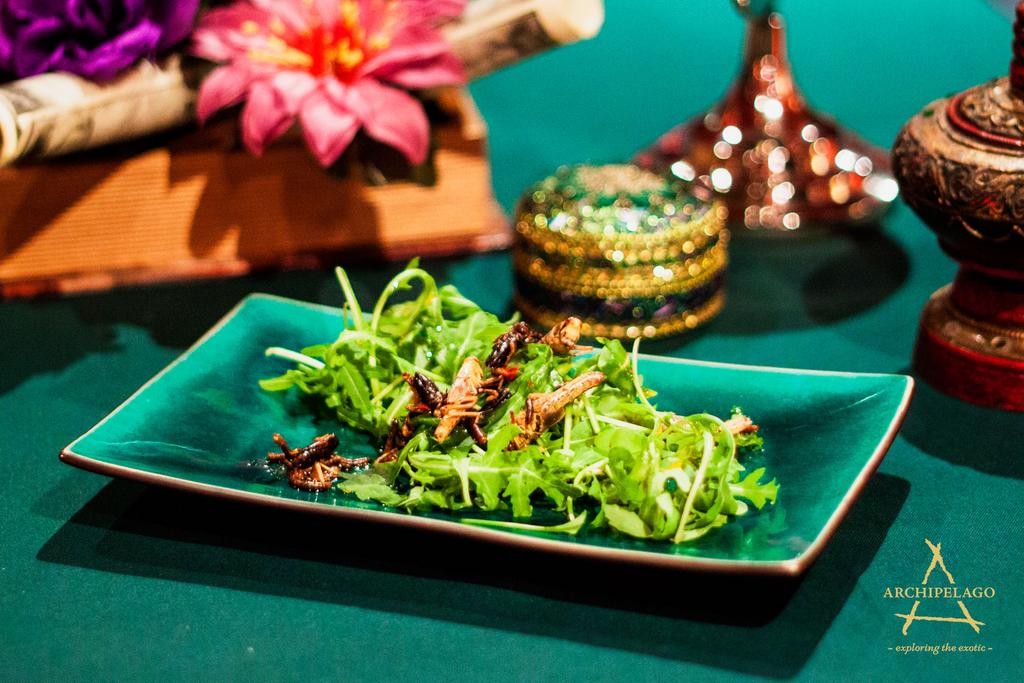 P.J Gullan and P.S Cranston (2014) – The insects, an outline of entomology – Living insect distribution as evidence for antiquity

David Raubenheimer and al. (2014) – Macronutrient contributions of insects to the diets of hunter-gatherers : A geometric analysis.