When we think about French people invested of the movement of insects as feed and food, we often think about our different great new start-ups. But there are also some people truly invested in the field who get less attention. They are working hard in the shadow, doing a tremendous job for their local ecosystem and adding an economic value. (Sounds like insects no ?) This is one of them I’m gonna interview today : Pierre-Olivier Maquart. 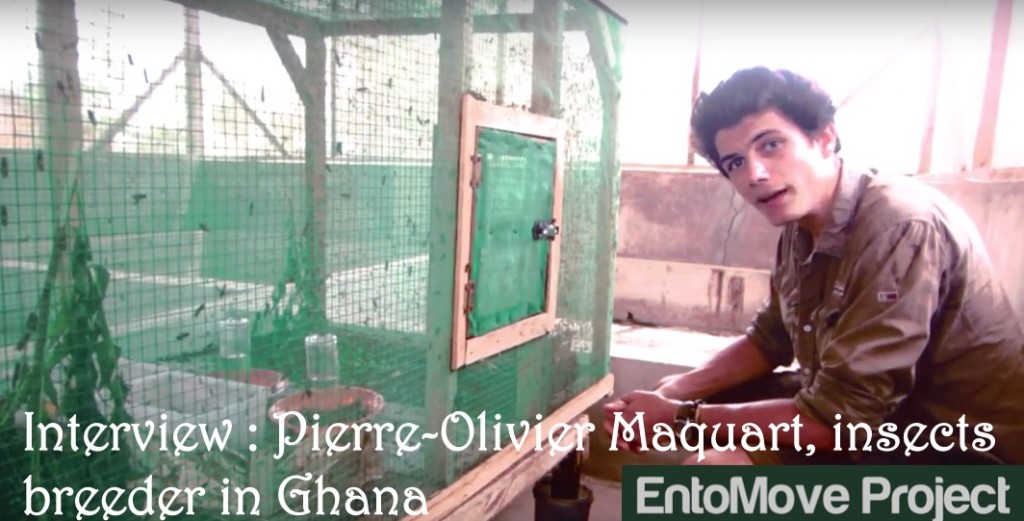 Pierre-Olivier is a French young man involved in the Ento-prise project in Ghana, A DFID (Department for International Development) funded project. They are rearing black soldier flies (Hermetia illucens) on organic waste in order to produce compost and feed for the fish and poultry.

I discovered his work by watching this video and I immediatly liked him and his mindset !

Pierre-Olivier, some insects, and the Ento-Prise

Florian : Hello Pierre-Olivier, I’m very happy to be in touch with you today. Can you tell me more about your background ?

Pierre – Olivier : My main field is entomology. I have a Master Degree in Ecology obtained in Rennes 1 and has always been passionated about insects. Insects taxonomy, that’s my really my thing ! For validating my degree, I made an internship at the IZIKO museum of Cape Town (South-Africa) where the goal was to classify and identify African wasps. After that, I wanted to study entomology but France don’t offer some… I found a PhD thesis from the Scottish Stirling University where the goal was to breed black soldier fly as a source of protein for animal feed. And it’s at this moment I began being interested by the aspect of insects as feed and food.

Florian : Woaw, great story ! With your passion about insects, you started identify bugs in your backyard as a child, then study old African wasps in a Museum and now you’re breeding fly in Ghana.

Pierre-Olivier : Well, we can say that… (laugh) Great resume !

Florian : Can you tell me more about you do ?

Pierre-Olivier : As you saw on the video, we are breeding black soldier flies that are fed on organic waste. Then, the larvae can be used as feed for tilapia and poultry and the compost on its side can be used as biofertilizer. 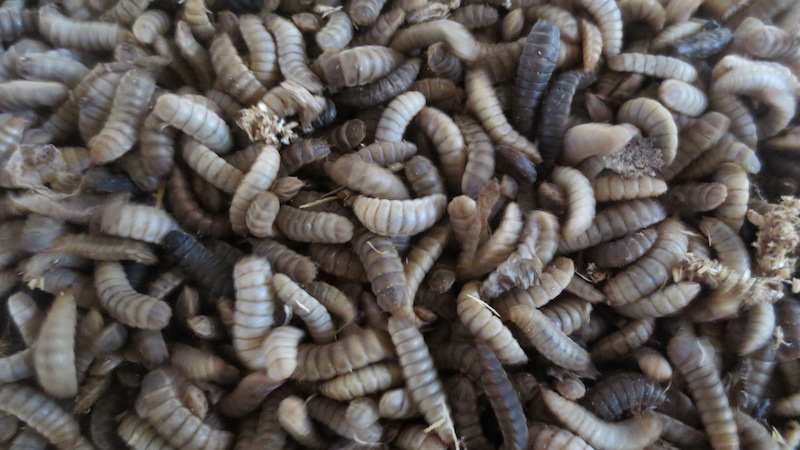 Florian : When we think about insects as food and feed, we are often referring about the need of proteins and its possible shortage in the future. You, in Africa, are where there is a real need already present. What are the issues of your project ?

Pierre-Olivier : The situation in Ghana is particular. With the huge Volta lake, the country is the second most important African country for aquaculture tilapia producer. At the same time, the international port taxes are very high. There is also a lot of fluctuation with the local currency. So the situation is really tough for the farmer in the aquaculture sector. They rely on expensive imported fish feed. Finally, for the moment, as Ghana is still developing, it’s very hard to focus and take in account the ecological aspect. That’s where our insects find their place ! They can be used as local feed for the tilapias producers. At the same time, the left-over substrate is very effective and cheap as a fertilizer for the farmer. Finally, it has some real benefits for the environment as it is a good way to limit and reuse food waste.

Florian : With all these benefits, I think that the local community is really supportive and interested by your Ento-prise.

Pierre-Olivier : Yes totally ! It can also create some jobs and skills for the local people. The advantage is that the black soldier fly is a « nice » and « clean » insect. For instance, -from my experience- people would be more reluctant to use the common houseflies, as it is known as a source of nuisance. 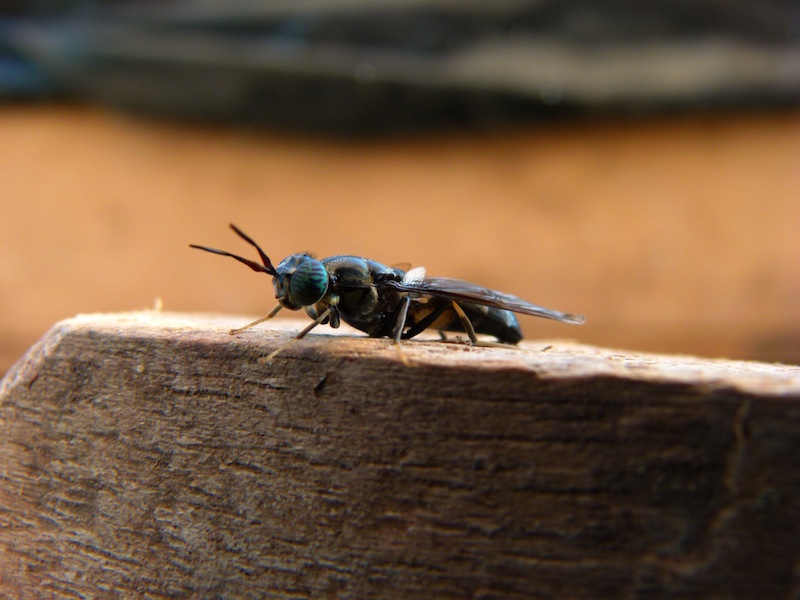 Florian : I saw your last video where you eat a palmgrub. Is it common in Ghana and how do you see the future of it?

Pierre-Olivier : I’m not an expert of insects as food but I don’t think Ghana as a whole country would embrace well entomophagy. It’s very localised: You can merely find people eating insects in 2 places of the country. It is know as a food of scarcity in the volta region, while it’s more a delicacy around the Kumasi region. I think it will stay very localised in Ghana.

Florian : For a lot of people living in Western countries, it’s still a belief that insects are only « food for the poor »…

Pierre-Olivier : Here in Ghana, it’s partially true. So even for a lot of Ghanean insects are considered as a food of scarcity. But it’s not the truth for the neighbouring countries, I think that insects as food are more common and accepted in Togo and Ivory Coast. If one day I breed insects as food, it will be there rather than Ghana.

Florian : Really interesting ! You’re pointing another very good point. As Westerners, we often imagine « Africa » or « Asia » as a whole and uniform culture… It’s funny , for us it’s obvious that German and French eat differently, so why should it be different for people living in Togo and in Ghana? Pierre-Olivier, tell me the truth… I saw the video where you ate the palm weevil, you didn’t look quite confident…

Pierre-Olivier : Yeah, it was my first time… Don’t laugh at me… Who said that eating insects was “normal”? We all have some certain apprehension before trying a new food… Moreover trying raw insects is something special. But in fact, it’s really good ! When I was in La Reunion Island, I tried fried wasps larvae and also termites in Southern Africa. I found they were all delicious !

Florian : If at first I wanted to make an interview, it’s primarly because you seems to be someone very friendly and open (which is really the case !). At this present moment, I feel that the movement is growing in a good way with this kind of attitude.

Pierre-Olivier : Yeah, I think that’s really important to share and be open. Even if it obvious there are some information that need to be confidential, hidding everything is not a good solution. With this growing community having this large variety of background and skills, we will work faster and better if we share some of our findings. Today, We have access to a lot of information that we can share and work on together with the social media, so let use this wisely !

We will work faster and better if we share some of our findings. Today, We have access to a lot of information that we can share and work on together.

Florian : You’re totally right ! I found fantastic that this idea bring people from all around the world trying who share this common goal. After all, there is no time to waste if we want to change the world… I think that we have to keep in my mind that we are only building the foundation of this huge and growing field. So let’s lay solid ones for the people who will use our work !
Last question : Share some insects ! If you can serve a dish made with insects to someone, what will the recipe be and for who ?

Pierre-Olivier : Mmmmh… I think I would share some insects with the explorer Mike Horn. I will serve him some wonderful fried wasps as a starter and rich and roasted palmgrub as a main course.

Florian : I hope there will be a place for me this day ! Thank you so much for your time and all of this information.

Speaking with Pierre-Olivier was really interesting and profound. He’s really a nice person, very open, passionate and cheerful. With a captain like him the Ento-Prise “will go where no man has gone before” ! It also reminded me that if even insects as food and feed is an ecological, nutritional, economical solution to today’s challenge of global malnutrition, it must be adapted to the local environment. For following the Ento-prise, you can follow them on Facebook and see their great videos on their Youtube channel.

If you want further information about edible insects in Africa, you should check this post from the incredible blog Bugible : “Researching Insects for Malnutrition: Where Will Entomophagy Have the Biggest Impact?“. You’ll read there some researches about crickets done by Darja Dobermann.

I hope you enjoyed reading this interview as much as I did speaking with Pierre-Olivier. That’s all for the moment, take care and see you soon!