Edible insects : What does the french report say

This week in France, there were a lot of articles about edible insects.

The reason : on the 9 april, the French Agency for Food, Environmental and Occupational Health & Safety (ANSES) had published a report : Insects as food: a review of potential hazards and research needs. Some of these articles were interesting despite their “catchy” title but I think that, globally, all of this media attention did not improve the image of edible insects… In fact, it should have because this report is very interesting.

(Here is the link for the entire report, for the moment it is only in french but you will find a lot of interesting ressources. If you want some more information, I can try to translate some parts for you)

The words on my photos were really used as titles or found in different articles. If you’re not aware of the subject, I admit that it can be frightening! But, is it necessary to be afraid? 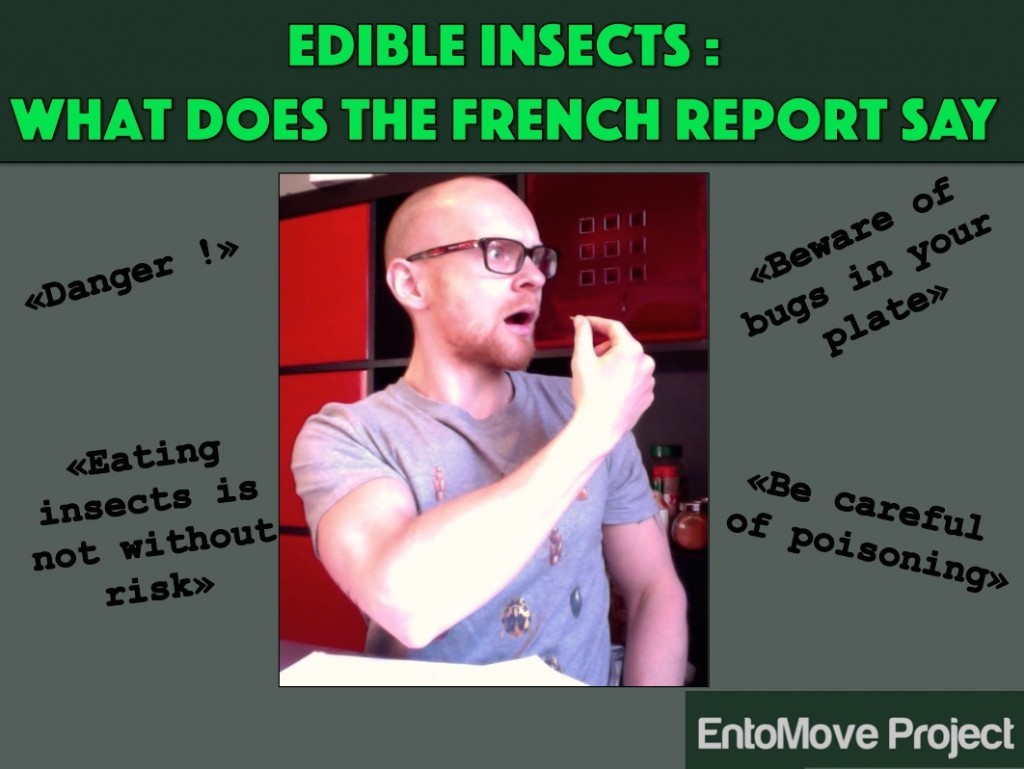 What is this report about?

This report is an overview of the scientific studies and benefits/risks about edible insects. The main subject treated is the health hazard. It talks also about the rearing conditions but few is said about the nutritional and environmental benefits of entomophagy.

This report is very important because it the first time that France made an overview of the current state, at a time when there aren’t some clear legislation in Europe.

What is it really saying?

First of all, it defines the consumption of edible insects in France as a “marginal niche market for consumer eager to new sensations”

The first parts give some few words about the general overview of entomophagy, the nutritional and environmental aspects.

The second part is about the rearing , the transformation and the slaughter recommandations.

The health hazards are divided into 4 parts :

Conclusion of the Agency :
“Like every food, insects can present some potential hazards that need to be control with a clear legislation in order to reduce the potential risks.”

So is this report really pointing the fact that eating insects can be dangerous? For me, the answer is clearly NO.

For me this report is an official declaration : The French government truly consider insects as food.

Every food can be harmful, so every time we are ingesting any food, it is a risk we are taking and accepting. When we choose to eat something, we are accepting this risk because we know clearly the product and the risks. (or at least we should!).

For the insects, it’s the same : in order to minimize these risks, they need to know better the product, identify and control the risk and that’s the point of the report : Insects are true food, they will come soon in our plate and we need to be able to know how to process them safely and which products are edible.

It’s true that some insects can be non-inedible for different reasons. They also may cause diseases or allergies but so can do an unclean water, some poorly cooked meat, unwashed vegetables, polluted cereals or raw beans.

I safely raise an edible specie fed with organic products (and a lot of love!), so I will continue to eat insects with pleasure!

You have to know that the majority of the people involved in the field are doing the same thing. We all know that it is a fragile sector in its infancy so we need to build trust with the audience. And the only way to do this, is to provide some great and safe products and clear and interesting information.

I personally trust the companies from which I had tasted the products. You too can do the same! But there are a lot of more different serious companies involved in the edible insects field, if you’re not sure about their products just ask them or us some questions!

If you want some more information about the report, about one part or another, I can make some (poor) translation for you!